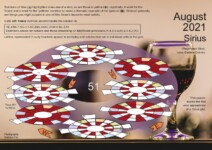 Clues and Grid by Sirius. The winner of the August puzzle was Janet Brown of Stroud. We were told that solutions of blue highlighted clues are of a kind, as are those in yellow, cryptically. A word for the ‘blues’ and a word for the ‘yellows’ combine to make a thematic example of the ‘greens’.

They might look a little scary, but because there are more word ‘cross- overs’, they give more help. Unfortunately, the setters know this!

Imagine that you are standing on the top of a block of flats. You see five squares going across and five going away. Great! It’s a 2D crossword.

Whilst nearly all solutions run from one side of the flats to the other, ‘RUSHTON’ changes direction. This friendly ‘snake’ is at 2aw,8ac-3. Notice the openings of four ‘lift shafts’ on the top floor. Let’s go down.

You see other floors as we descend that have crosswords set out on them too. But there is more to see.

Look up and down to find words that start at the top and run down (d) to the bottom. ‘PEARS’ is at 6d.

Now we have a 3D crossword. Fabulous!

But wait… there’s more! At least one puzzle in every calendar is a ‘Seven Dials’ structure, where clues directed:

C are circular, running from the number around the dial in a clockwise direction

AC run in an anti-clockwise direction

d have conventional down solutions

Colours guide the eye along lines of longitude.

The torus is formed of eight dials projected as they would be seen by a traveller going round inside the torus. Clues directed: