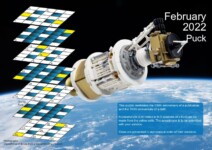 Clues and Grid by Puck Stately, plump Puck came from the stairhead, bearing a grid on which various words were crossed. The background was credited to David/Force of Bricks from a design by Jonas Kramm and appeared to be a Lego model of a spacecraft in orbit about a planet. This puzzle celebrated the 100th… END_OF_DOCUMENT_TOKEN_TO_BE_REPLACED

Each 2022 3D crossword puzzle will be published below by the beginning of the month. The deadline to enter the prize draw for regular monthly puzzles will be the last day of that month. Extra puzzles will be added from time to time and will have later, mid-month deadlines.

Hints & Tips: If you need helping cracking that last clue, or even getting started, hints and tips for regular puzzles will be published in the second half of each month. Subscribe to the Hints & Tips newsletter to receive them by email.

by Tramp and Gin

by Nutmeg and Bozzy

by Boatman and Jolt

Solved it? Enter the prize draw by 31August.

by Imogen and Patch

by Vlad and Aramis

by Pickles and Gin 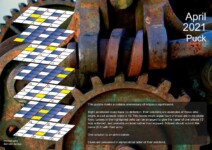 Clues and Grid by Puck. The winner of the April puzzle was Sheila Brain of Exmouth. With this puzzle Puck was the winner of the 2019 RPM Trophy (3D’s end of year competition for 3D crossword designers) so I’ve very much been looking forward to solving it.

Clues and Grid by Puck The background for this puzzle is a Bernard Spragg photograph showing a gear mechanism connecting two shafts at right angles. This grid by Puck won the 2019 RPM Trophy. The puzzle marks a notable anniversary of religious significance. The event in question has an apparently revolting name which rarely fails… END_OF_DOCUMENT_TOKEN_TO_BE_REPLACED 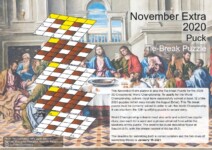 The Instructions The November Extra puzzle is also the Tie-break Puzzle for the 2020 3D Crosswords World Championship. To qualify for the World Championship, solvers must have successfully solved at least 12 of the 2020 puzzles (which may include the August Extra). This Tie-break puzzle must be correctly solved in order to win the World… END_OF_DOCUMENT_TOKEN_TO_BE_REPLACED

Clues and grid by Puck, won by Richard Green of Powys, Wales.

Happy New Year solvers! The 2021 3D crossword puzzles will be made available progressively throughout the year. The deadline to enter the prize draw for regular monthly puzzles will be the last day of that month. Extra puzzles will be added from time to time and will have later, mid-month deadlines.

Hints and tips for each puzzle will be published sometime in the middle of each month. Subscribe to the Hints & Tips newsletter to receive them by email.

Solvers who buy the calendar and correctly solve 12 puzzles by the due date each month will be eligible to enter our annual tie-break competition for the 2021 3D Crosswords World Championship. If you have been entering the monthly competitions, you can check your progress towards the tie-break qualification.

by Nutmeg and Jolt

by Arachne and Patch

Deadline for entries: 31 May

by Imogen and Max Liversidge

by Vlad and Gin

by Pasquale and Bozzy

You are invited to vote for your favourite puzzle of the year from the 13 puzzles featured in the Calendar (the extra puzzle was Sirius and Enigmatist’s tribute to Araucaria) plus the August extra puzzle.

You are allowed to allocate a total of 3 votes. All 3 may be allocated to one puzzle, or two votes to one puzzle and a single vote to a second puzzle, or one vote each to three puzzles.

All our solvers and contributors are encouraged to vote. The only rule is that setters and designers don’t vote for their own creations, magnificent as these might be.

Entry Requirements The entry requirements for the 2020 3D Crosswords World Championship are as follows: The November Extra/Tie-break puzzle must be solved correctly, with the solution submitted by the given deadline of January 15 2021. Two written clues must also be submitted by the same deadline, these being clues for the highlighted word and phrase… END_OF_DOCUMENT_TOKEN_TO_BE_REPLACED